Is that a cool Fall breeze in the air? ... no... BUT, we're almost ready for Football season. Only TWO Saturdays until kickoff!!!!!! Are you Game Day Ready? Checkout Tailgate Queen for the best selection of gameday dresses

Posted by Stephanie @ Tailgatequeen at 7:22 AM No comments:

First up in gameday looks is Clemson and LSU. We love all our tigers AND all our game day dresses


Posted by Stephanie @ Tailgatequeen at 8:03 AM No comments:

Are you Football Ready???? Game Day is quickly approaching and, if you're like me, you've been practicing intimidation expressions in the mirror daily. Along with those game day looks, I wanted to put together some game day fashion looks for you to enjoy! Hopefully, you'll be prepared to look good and menacing on game day. The life of a lady is so difficult sometimes... All gameday dresses can be found at http://tailgatequeen.com

A Few NEW Favorites for our Fashionable Fans:

Posted by Stephanie @ Tailgatequeen at 7:31 AM No comments:

Every now and then we stumble upon a MUST HAVE item in our search for the perfect tailgate. Today, that item is the Blacktop 360. This Grill/Fryer does. it. all. Don't believe me? Check it out for yourself. 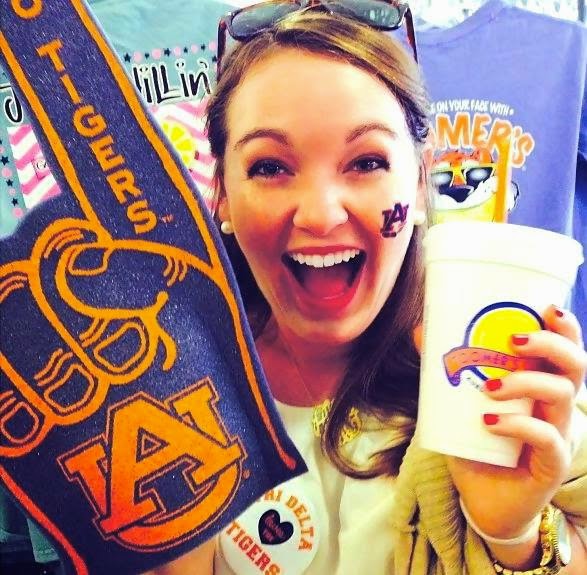 As you know, QT is obsessed with everything fall, football, & Tailgate Fabulous! We also know that a lot of fans across the country have the same amount of pride for their school. In our My Game Day Series we want to showcase everything that makes tailgating across the US FANtastic.


By highlighting individual fan experiences, we hope to let you in on what makes these universities amazing come football season. These institutions are steeped in tradition, read first hand how they're living up to their name!

Auburn Tailgating from a FANS Perspective:

I spent my game day morning at the Legendary, 130-year-old, Toomer's Corner located in the heart of Downtown Auburn. We couldn't begin tailgating without some Famous Toomer's Drugs Fresh-squeezed Lemonade ("We're told it's what God drinks on game days"-Southern Living Magazine) Our 45-21 Win over Arkansas included torrential downpours, heat advisory warnings and was even postponed but that didn't stop us from tailgating! Our dear Toomer's Oaks are still regrowing since being poisoned but Auburn fans don't let that stop them from Rolling the Trees! War Eagle from the loveliest village on the plains! 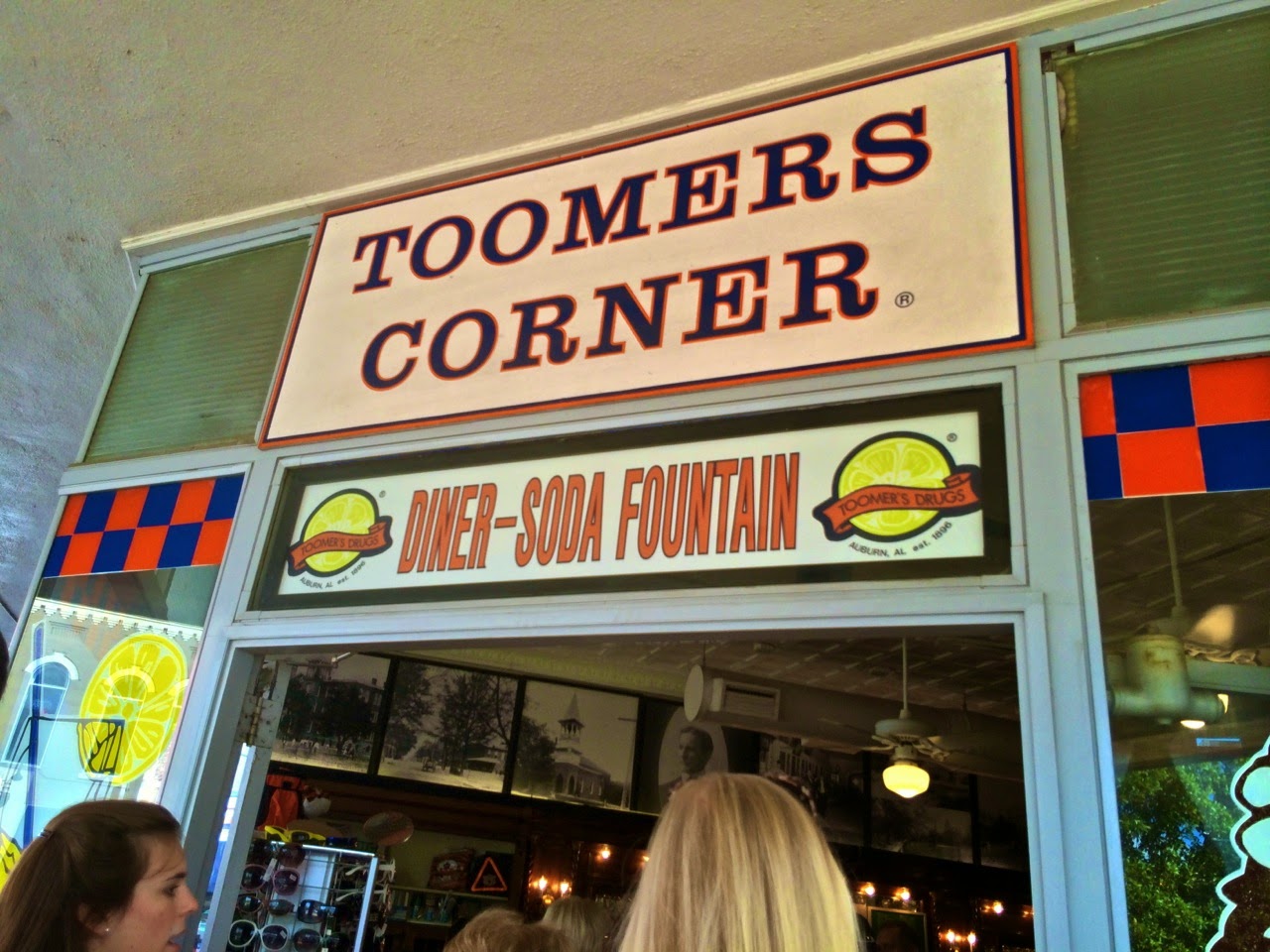 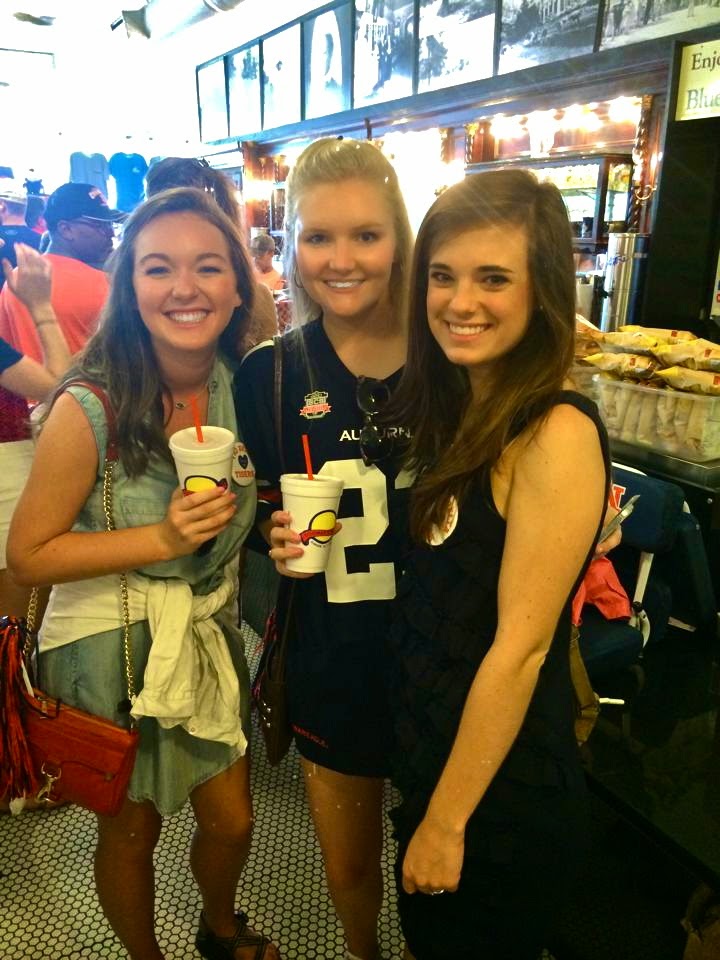 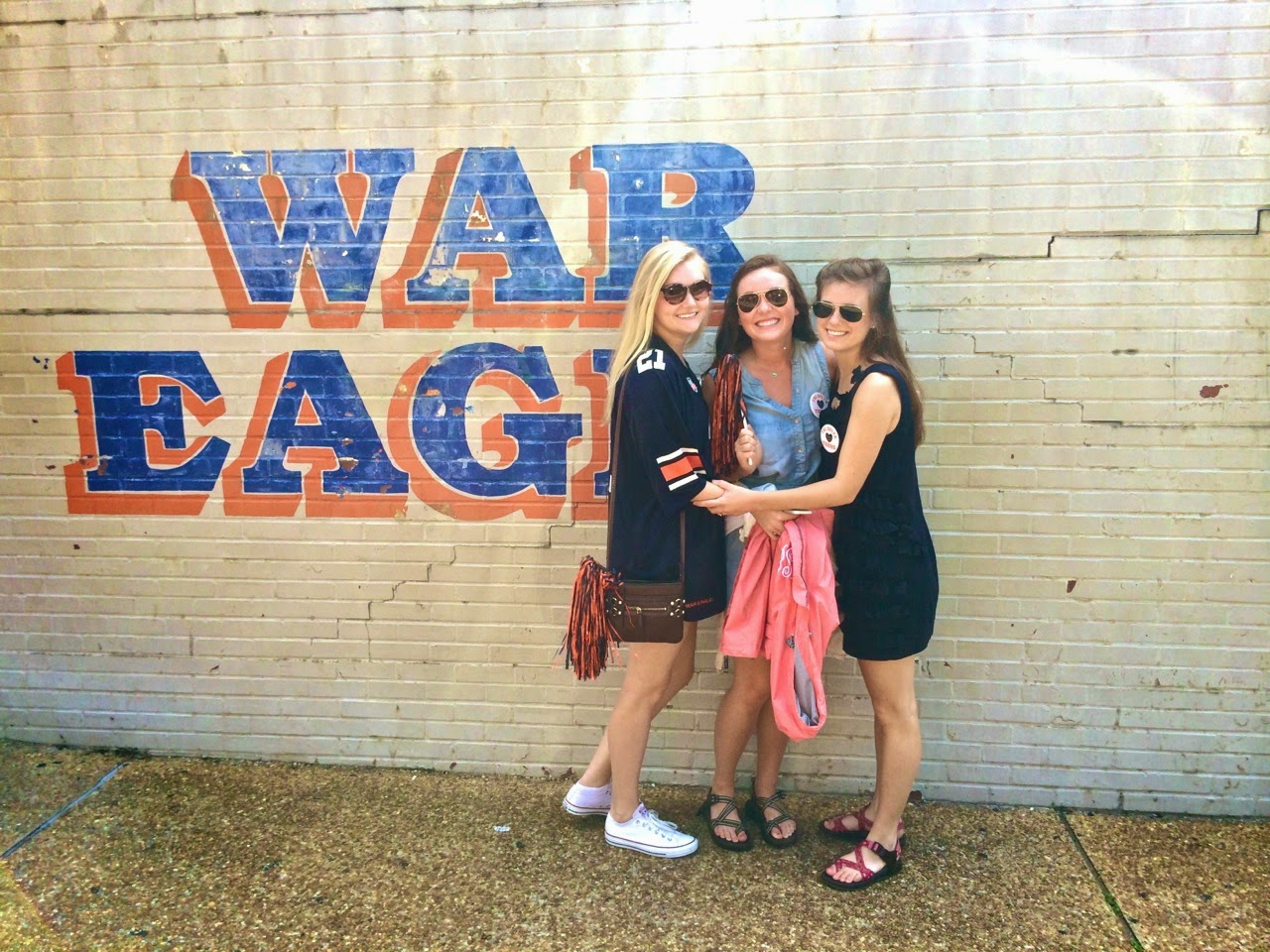 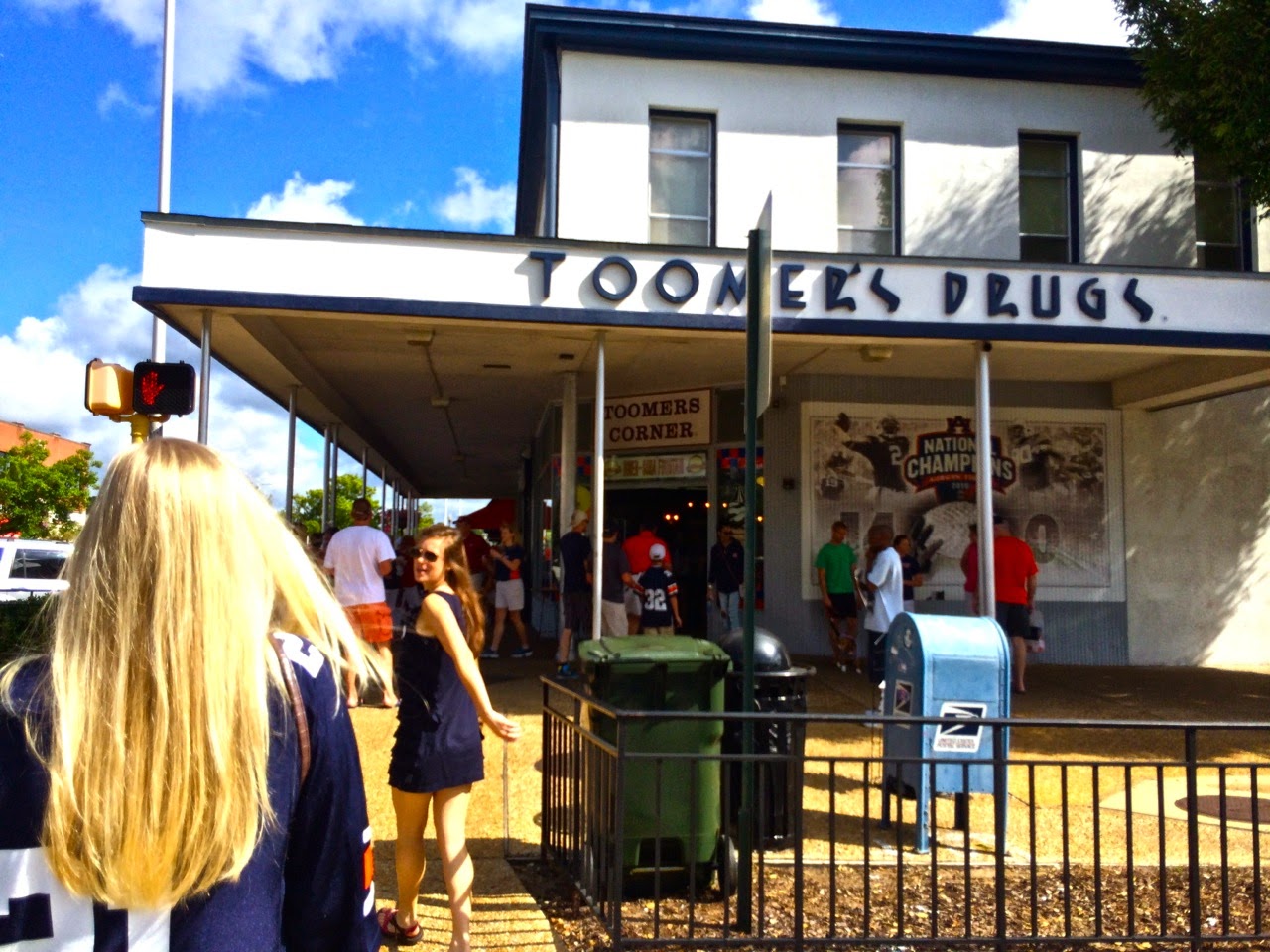 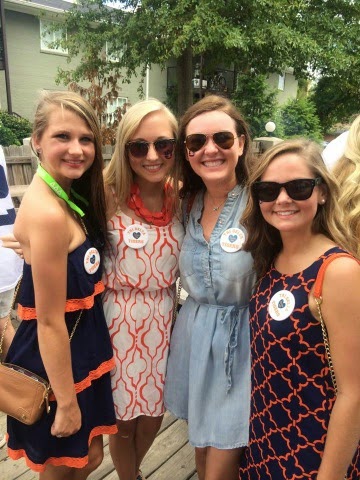 The Tiger Walk seems to be the most copied tradition in college football. Most teams now do some variation of this walk into their stadium before home games. The Tiger walk occurs 2 hours before game time and spans the distance between the Auburn Athletic Complex and Jordan-Hare Stadium. Die Hard Auburn Fans line Donahue Drive while cheering on the players as they make their way to the stadium. 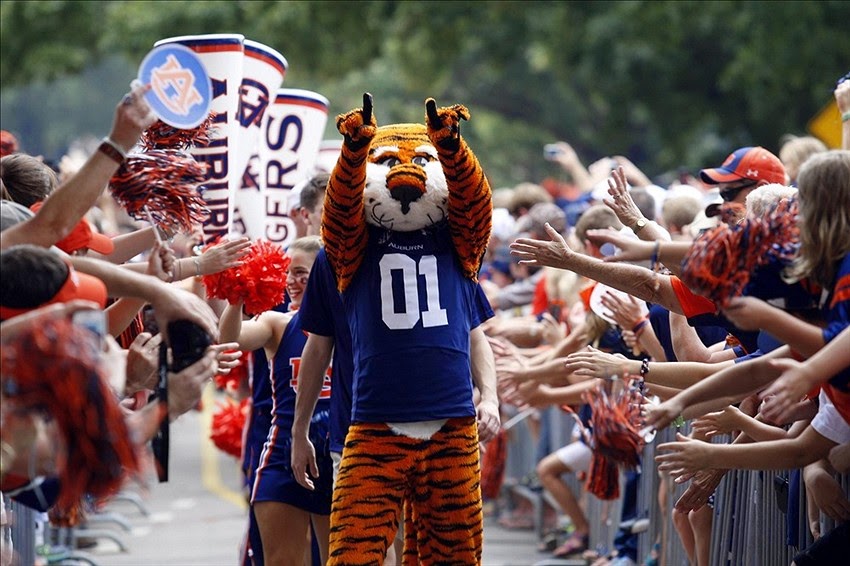 Rolling Toomer's Corner Where College Street intersects Magnolia Ave, Toomer's Corner has long been the gathering spot for athletic Celebrations. After any football win, the oak trees lining the streets are rolled in celebration. 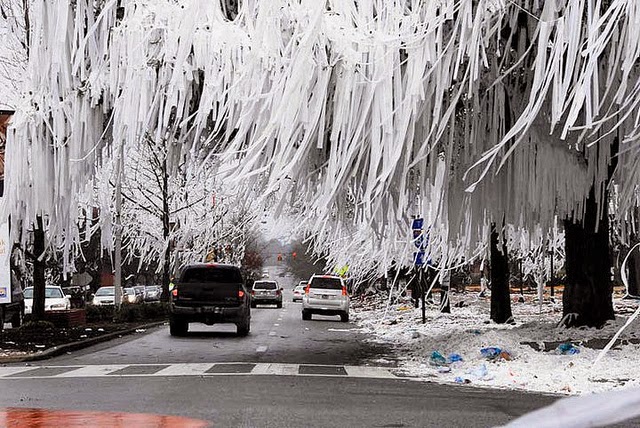 War Eagle Chant & Flying of the Eagle there are many legends of the Auburn War Eagle Chant, but here's one provided by Bleacher Report:
There was a spectator at the game, who had a pet eagle with him, and he just happened to be a veteran of the Civil War.  He supposedly had the eagle as a pet for over 30 years.
The eagle broke free from his master and began majestically circling the field at the same time Auburn was marching toward the Georgia end zone, and quite successfully winning the game.
The students were thrilled to say the least and they took the bird's presence as an omen of success.
So, the Auburn students and fans began to yell War Eagle to spur on their team.
At the game's end, the eagle took a sudden dive, crashed into the ground, and died.
But, the battle cry War Eagle lived on to become a symbol of the proud Auburn spirit. 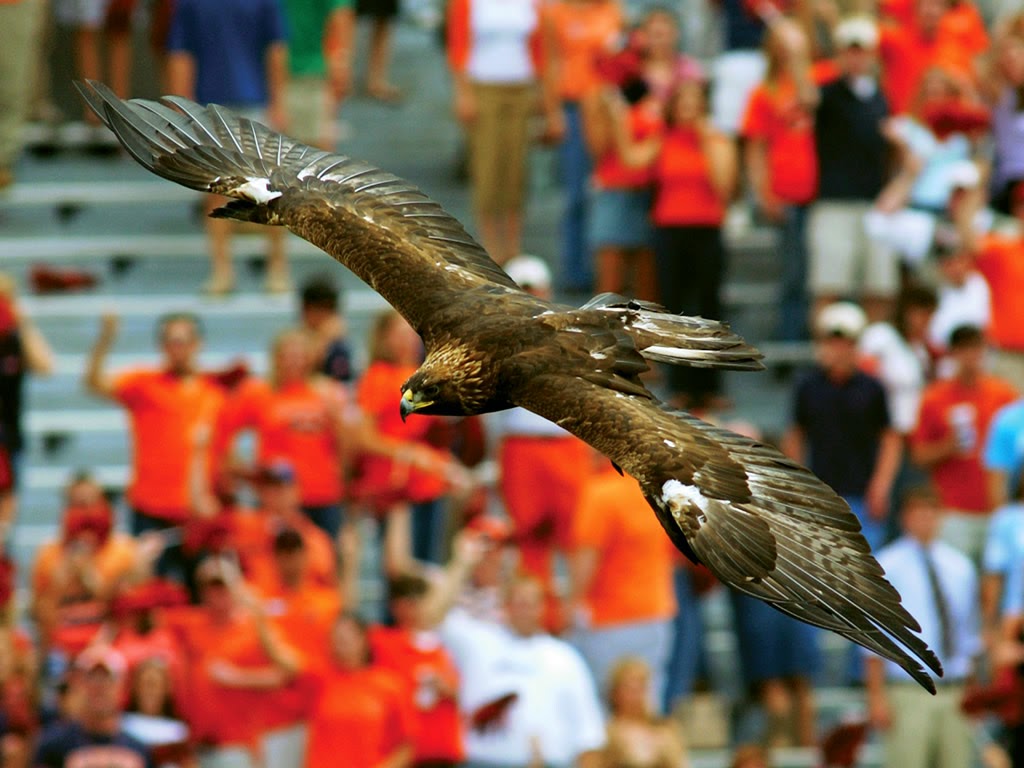 This Auburn Chic Post wouldn't be complete without a little QT Auburn Style :)

Posted by Stephanie @ Tailgatequeen at 1:52 PM No comments:

Posted by Stephanie @ Tailgatequeen at 8:54 AM No comments:

Happy Game Day to all our Fashionable Fans! May all your dreams of winning come true!

Posted by Stephanie @ Tailgatequeen at 7:01 AM No comments:

Stephanie @ Tailgatequeen
Queen of the Tailgate is a boutique for everything Tailgate chic... Now also a blog stemming from that boutique, we hope you enjoy all of our daily fun! We want to include all of our fans in everything we're up to, events we're working on, and (of course) Giveaways! Thanks for stopping by!